« Panama papers » : a clearer picture on the hidden Modigliani – KelNews

« Panama papers » : a clearer picture on the hidden Modigliani 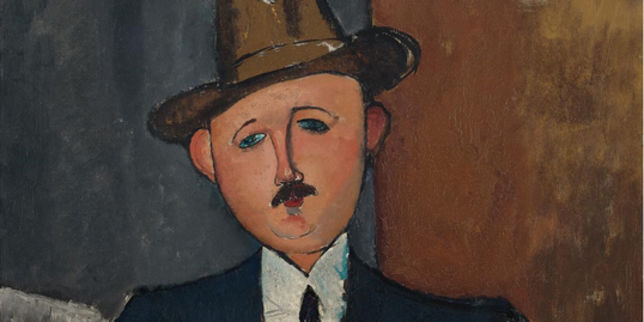 The case now seems to be settled. Seated Man With a Cane, a painting by Amedeo Modigliani at the centre of a long legal dispute brought to light by the « Panama papers », is a plundered work of art. The international investigation on tax havens, to which Le Monde has contributed, provided evidence that the work of the Italian master is owned by David Nahmad, head of one of the world’s wealthiest dynasties of art collectors. It demonstrated how the family had concealed its assets behind a Panama-based company, the International Art Center, the official owner of thousands of paintings, including the disputed Modigliani work. A niggling doubt remained, however: was this the work seized from art dealer Oscar Stettiner during a forced sale in July 1944?

Today that question has been answered with near certainty. The lawyers of Philippe Maestracci, grandson of the art dealer deprived of the work, have collected enough information to trace the painting’s troubled journey, from its completion in 1918 or 1919 to its sale to the Nahmad family in 1996. Not only does the episode of Nazi Occupation fit in naturally, but it has also proved directly related to the identity of those who sold the painting to the Nahmad family in 1996, through Christie’s in London.

The first discovery concerns the identity of the model. The identity of this moustached “seated man”, hands resting on a cane, was unknown. The Institut Restellini, undertaking a catalogue raisonné of the painter’s works, has given its verdict: the sitter in the painting is Georges Menier. This famous manufacturer, the eldest of the fourth generation of well-known chocolate makers, mayor of Lognes (Seine-et-Marne) for thirty years and acknowledged composer, frequented the artistic elite in Paris. Art historian Marc Restellini confirms that he found traces related to the painting in the Menier Archive in the Musée d’Orsay and according to the memories of the wife of Modigliani’s last dealer, Anna Zborowska. James Palmer, the famous investigator of looted artworks behind the legal proceedings, specifies “Philippe Maestracci confirmed to us that his grandfather Oscar Stettiner was friends with Georges Menier”. A further point is that Modigliani painted a portrait of Simonne Menier, Georges’ wife, in 1919. It is therefore highly likely that the two paintings, of Georges, believed to date back to 1918, and of Simonne, were painted around the same time.

The identification of the sitter throws light on another mystery. It turned out that Oscar Stettiner had loaned his painting to the Venice Biennale in 1930. In the archives of the art exhibition, it was specified that this painting was the “counterpart” of another, exhibited at the same time. Yet none of the works listed had the same format, or subject, as the Portrait of a man (as it was then listed). David Nahmad’s lawyers pressed this lack of evidence. Yet, the Modigliani works on display to visitors that year included number 3 on the list, the portrait of Simonne Menier, the elusive “counterpart work”.

There is no longer any doubt: the painting exhibited by Oscar Stettiner in 1930 and that purchased by David Nahmad in 1996 are one and the same. The question remains as to what happened in the interim. Could Mr Stettiner, art collector but also dealer, have sold his painting in the 1930s? This has been the main argument put forward by the Nahmad clan for the last three years. “I have sold 10,000 paintings in my lifetime”, David Nahmad explained to Le Monde in March this year. “If tomorrow the Nazis were to come back, should my children seek to reclaim all that I sold?” No photograph, no precise description of the work was mentioned in the sale catalogue on 3 July 1944. No further information appears in the claim filed by Oscar Stettiner. Only the identity of the buyer is certain, one John Van der Klip. This gallery owner confirmed that he purchased the painting for 16,000 francs in 1944 and sold it on for 25,000 francs, through a friend, to an American officer whose name was unknown.

How, in that case, can this painting be linked to the one exhibited in 1930 and purchased in 1996? In April, Le Monde drew the first dotted line between the two. In its catalogue of modern paintings to be auctioned on 25 June 1996, the Christie’s catalogue stated that the Seated Man With a Cane had been acquired during an anonymous sale between 1940 and 1944 by a “J. Livengood”, then passed down “by descent to the present owners”. We then discovered that one of John Van der Klip’s three daughters, Christiane, had married an Edwin Livengood, and had with him a son named … John. The family is therefore one and the same.

In truth, the paintings are one and the same. While John Livengood, born in 1952, could not be the alleged acquirer of the painting in 1944, he was … the seller in 1996. His widow, Eve Livengood-Kerfante, confirmed this to Le Monde: her husband, a composer of experimental music, and his aunt, Maud Van der Klip, sold the artwork to David Nahmad. In a letter dated 22 May and forwarded to James Palmer, she explained the painting’s trail. Contrary to what was said to the judicial authorities following the Liberation, John Van der Klip never sold the painting. It remained in the family until 1996. This was not the only time the gallery owner was on the wrong side of the law: between 1946 and 1953, he was ordered to return despoiled artworks that he had purchased no fewer than four times.

This new information gives rise to two questions. Firstly, let us consider the role of the auction house. In its 1996 catalogue, Christie’s made three mistakes. It claimed that the painting had belonged to Roger Dutilleul, one of Modigliani’s main art dealers, while there is no evidence in the Dutilleul archives to corroborate this. It added that it was exhibited in Venice in 1930, listed as number 16, while it was actually number 35. Lastly, it claimed that the work had been purchased by J. Livengood instead of J. Van der Klip. The last two mistakes cut off the two trails that could link the painting back to Oscar Stettiner. Why were such mistakes made? Christie’s has always declined to comment when faced with journalists’ questions, on the basis of the ongoing judicial proceedings in New York.

All that remains is to question the painting’s future. Speaking to Le Monde, David Nahmad had claimed that “he would accept to return the painting subject to proof”. Has sufficient evidence been uncovered today? When contacted by Le Monde, his lawyer Richard Golub called journalists’ work on the “Panama papers” “irresponsible” and refused to make any comment on the case. It is therefore highly likely that the painting’s future is in the hands of the New York Supreme Court, where proceedings are ongoing.