How Singapore exports its model for a Smart City – KelNews

How Singapore exports its model for a Smart City 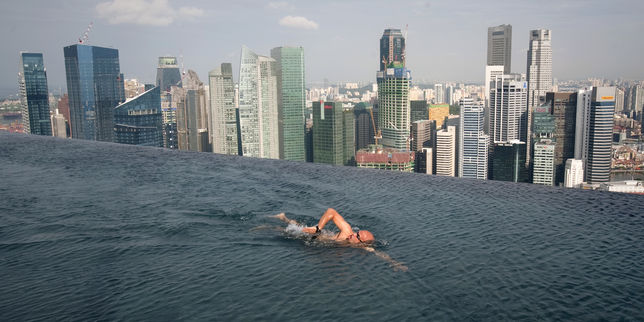 The infinity-edge pool perched in the 57th floor of the Marina Bay Sands, in Singapore, in June 2014. | Vivek Prakash / REUTERS

Singapore is tiny, beside the giants of India and China; it nevertheless manages to play an important role where ‘smart cities’ are concerned. With its 4.7 million inhabitants, ‘little’ Singapore has established itself as one of the models in the world for the ‘smart city’. The city-state plays a key role in the extraordinary development of the two Asian giants, China (1.4 billion inhabitants) and India (1.3 billion inhabitants). It experiments on all fronts, loves innovations and multinationals, and seduces clients from all over the world.

Playing in part on its Chinese-origin community (75% of the population), Singapore has signed several partnership agreements with China for testing and further development of smart cities. This is the case, amongst others, for the business park in Suzhou and the high-tech eco-island of Nanjing, the former capital, which has a population of over 8 million inhabitants. The experiments are then reproduced in other cities, including the eco-city of Tianjin and the City of Knowledge in Guangzhou. This methodology “provides a platform enabling Singaporean and Chinese firms to demonstrate their capacities in matters of technologies in a holistic manner», explains the INFOCOMM Agency in Singapore.

Data collection on a massive scale

And China is not alone. To develop its high-priority project of creating 100 smart cities by the year 2020, the Indian Prime Minister, Narendra Modi has also turned towards the know-how and investment capacity of the Singaporeans (of whom over 7% are of Indian origin). Singapore scores points when Hong Kong is marking time. Hong Kong is further away geographically and relies on the gamble – made long ago – of betting heavily on Information and Communication Technologies (ICT).

In more specific sectors, the Nation-state positions itself as a sort of life-size laboratory at world level of the city of tomorrow with cutting-edge experiments on autonomous vehicles or ethnic diversity by neighbourhood and even by apartment building. Above all, data collection on a massive scale combined with the predictive intelligence of big data is used in all sectors for modelling projects, planning changes and endeavouring to offer the most innovative serves, whether it be a question of fluidity, of security, of the comfort of buses or the location of child-care centres. The municipality has moreover implemented a measure which is often a source of anxiety elsewhere. It has set up a sophisticated traffic control system, the price of which varies in function of the amount of traffic, the neighbourhood, the time and the day of the week.

The brand knows how to sell

With the support of this strong position, Singapore organises a World Cities Summit each year. In 2016 this brought together mayors and leaders from 103 cities in 63 countries: all either clients already or potentially so. The brand knows how to sell and it sells itself well. It knows how to rely on its powerful financial community and, for implementation, on various private firms, including Surbana Jurong, present all over the world.

In 2014, the Prime Minister launched the Smart Nation programme, placed under the responsibility of the Minister for Foreign Affairs, Vivian Balakrishnan, thus displaying its ambition to look further afield. A cardinal virtue, the government has understood the importance of a systemic vision for improving cities by means of technology.

Both at home and abroad, Singaporeans focus on sustainable development and concern for citizens in the form of provision of quality services. But, overall, their model tends more to the ‘datapolis’ side than to the ‘participolis’ side: it prioritizes collection and processing of data more than the effective participation of citizens.

This model is limited, as Anthony Townsend, a researcher at the University of New York points out. In an article published by the Technology Review, he states that “The perfectly controlled and efficient utopia of a very safe and smart city can work in a place like Singapore. But it would probably never work in New York or Sao Paulo, where expectations in terms of conception and of what make the vitality of a community, are completely different”. Townsend thus confirms that there is no single model of a smart city. This in no way prevents this small nation-state from innovating or from finding clients all over the world.

On April 7th in Lyon (France), « Le Monde » and its partners already awarded laureates of the second edition Le Monde Smart-Cities Innovation Award for their innovative projects improving urban life. A conférence on « Governing the city differently : can the cities reenchant democracy ? » was held on the same date.

Find out about cities current affairs analyzed by « Le Monde » journalists on our « Smart-Cities » section, on Lemonde.fr

Songdo, ghetto for the affluent