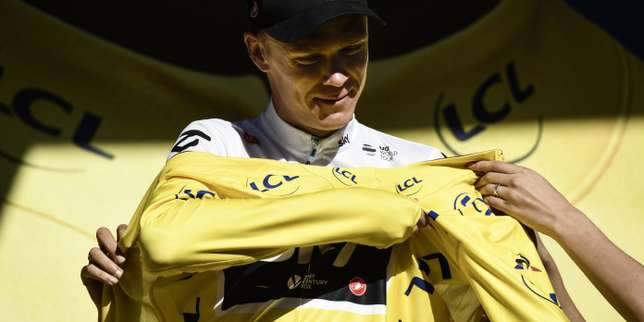 Great Britain's Christopher Froome puts his overall leader yellow jersey on the podium at the end of the 181,5 km fourteenth stage of the 104th edition of the Tour de France cycling race on July 15, 2017 between Blagnac and Rodez. / JEFF PACHOUD / AFP

Christopher Froome, a four-time winner of the Tour de France, might not be able to compete for a fifth title this year. The organisers do not want him to be part of the race due to depart on July 7.

Le Monde has learnt that the race’s owner, Amaury Sport Organisation (ASO), is trying to prevent Froome from taking part in the Tour. They have forbidden Team Sky to sign Froome in, in an attempt to protect their own image, as his doping procedure is still pending.

« We are confident that Chris will be riding the Tour as we know he has done nothing wrong », Team Sky told Le Monde. ASO were not immediately available for comment.

Christopher Froome is still allowed to race as long as the case regarding his abnormal salbutamol doping control has not been settled. But the Tour does not want to find itself in the same situation that the Giro was in, earlier this year. Froome won the Giro, but one has yet to know what will become of his victory.

ASO’s case is based on article 29 of its own rules (in compliance with UCI’s rules), which states that « ASO expressly reserves the right to refuse the participation in – or disqualify from – the event, a team or one of its members whose presence is liable to damage the image or reputation of ASO or those of the event ».

Team Sky has already appealed this decision to the court of arbitration of the French olympic committee (CNOSF), and will fight the case on July 3rd. The decision should be known the following day. It could be appealed to the Court of Arbitration for Sport (CAS), but they will probably not have a chance to rule the case before the beginning of the Tour.

Lire aussi : Our story in French